Barite with Cerussite on Galena

Morocco. Parts of the minerals can also be found  throughout the United States, Asia, and Europe. 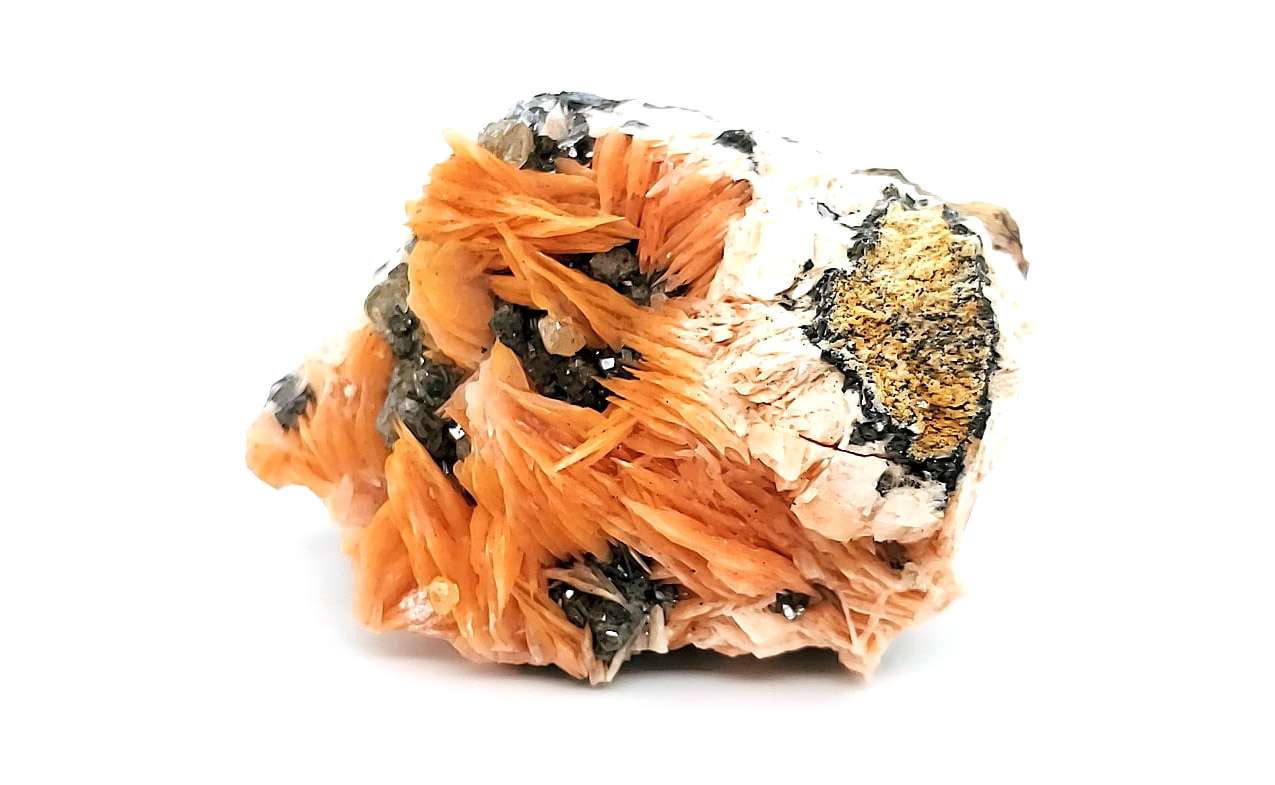 Barite’s main source of the element is barium, which is used as an added-value filler in paint and plastics, sound reduction in engine compartments, along with coating of automobile finishes for smoothness and corrosion resistance.  Barite has the ability to block x-ray and gamma-ray emissions and it is used in the medical industry.

Cerussite (also known as lead carbonate) is an important ore of lead.

Galena is the most important ore of lead and an important source of silver.  Lead’s most common use is for making batteries, however, significant amounts are also used to make lead sheets and pipes.  Due to its low melting point, it can also be used as an alloy.

Barite is a mineral consisting of barium sulfate and it crystallizes in the form of masses, tabular crystals, and sometimes as stalactites (hanging like icicles).  Barite is generally white or colorless, but it can also display colors of pink, blue, yellow, grey and brown. Barite is most abundantly found in the countries of Romania, England, Morocco, and the USA

Cerussite forms some of the most interesting, complex, and varied crystals and groupings in the mineral kingdom. Its most prevalent form is as small, flat, thin plates, as well as prismatic and tubular crystals.

Galena, also known as lead glance, is a cubic stone that is made of lead minerals. Its name is derived from the greek word “galene” which means ore of lead. It was first reported by Pliny in 77 AD. This mineral has been mined for thousands of years due to its lead and silver content

FUN FACT: Did you know that Galena is the official state mineral of the U.S for the states of Kansas, Missouri, and Wisconsin?  The former mining communities of Galena, Kansas and Galena, Illinois took their names from deposits of this mineral.

Cerussite is most commonly used as a grounding stone since it has a strong connection with both the Crown and Upper Crown Chakras, clearing them and bringing pure light into the body. It aligns the nervous system and leaves the body open to be healed.

Galena is said to inspire and harness the personal power that exists within, so that you are able to complete tasks and accomplish your goals. Galena can help you stay motivated and increases the drive to succeed.

Barite is a stone of inner vision and acts as a magnet to high frequency energy.  It activates and clears blockages in the upper chakras allowing for a stronger connection to intuitive and psychic abilities. Barite assist in recognizing where one must let go and to allow change. It increases one’s wisdom and mental awareness.

Ammonite Fossil Luck, Prosperity, Childbirth Origin Found in mountains and sedimentary basins from the Devonian to Cretaceous periods throughout [...]