Celestite (also known as Celestine) can be found worldwide from Madagascar, Czechoslovakia, Egypt, France, Mexico, Tunisia, Peru, Poland, to the United Kingdom and in the United States. 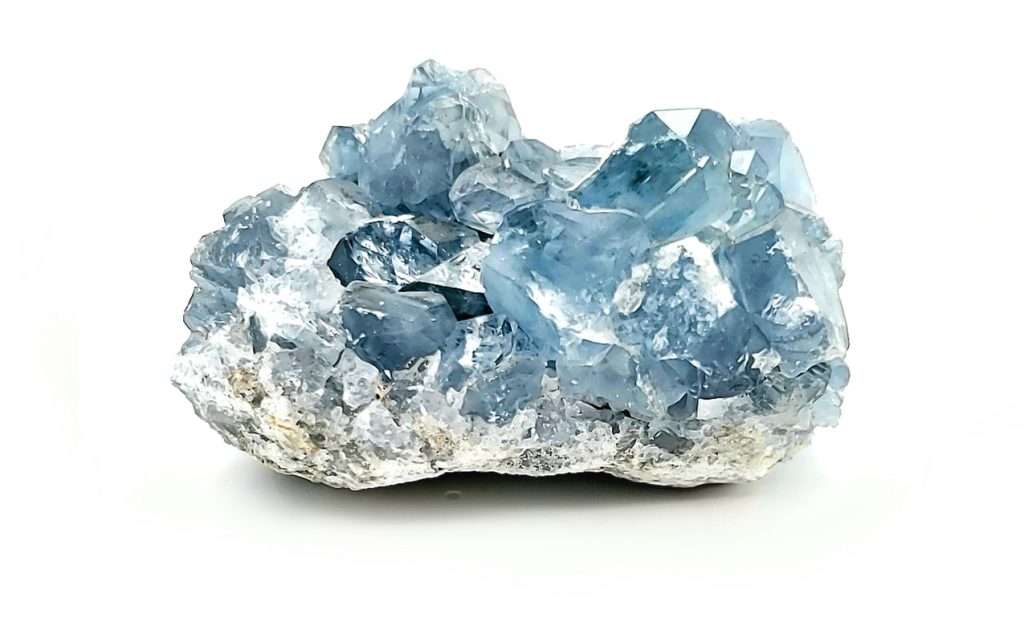 Celestite is a mineral consisting of strontium sulfate. It’s best known for its delicate blue color. It can also occur as colorless, white, pink, pale green, pale brown, black and even orange. Celestite derives its name from the Latin word caelestis meaning celestial, which in turn is derived from the Latin word caelum, meaning sky or heaven. Celestite can occur in geodes as well as crystals. Celestite is found in small quantities throughout sedimentary rock, rivers, streams, and ocean beds. It is often found growing alongside Gypsum, Anhydrite and Halite.

Celestite and the carbonate mineral strontianite are the principal sources of the element strontium, which is commonly used in fireworks and in various metal alloys. High quality Celestite can be faceted for jewelry.

Celestite is thought to bring calmness and balance. It encourages inner peace, sleep, and powers of compassion, love, friendship, fertility, growth, spirituality and reconciliation. It is also useful for remembering dreams and has always been thought to attract good fortune. Celestite is a great stone for creative people, as it aids in helping the wearer to access their intuitive creativity. It also encourages a great openness to new experiences

Barite with Cerussite on Galena

Barite with Cerussite on Galena Grounding, Motivation, Wisdom Origin Morocco. Parts of the minerals can also be found  throughout the [...]